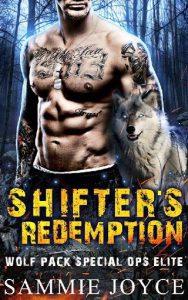 Darric is struggling with a moral issue after their last mission. Why are they doing all of this? What’s the point? He’s never had a problem doing what was asked of him before. He would attack or shoot first and ask questions never. But lately, he’s seeing how the guys around him are all starting to settle down and it makes him think about the lives he’s ripping apart. He doesn’t understand why any of this is happening and something feels wrong. He thinks that they might be used for something but he has no proof.
When he tries to figure out what’s going on, he’s punished and put in his place – Slater doesn’t approve if anyone steps out of line. Darric slowly starts to lose his mind. He doesn’t know what’s real and what’s not and he feels like his animal is far too close to the surface.
When he meets Nicole, everything changes. She’s a secretary at the base and he realizes that every life is worth something. He can’t just kill and destroy without knowing what he’s doing. He wants to take action but it will get him put in solitary confine if he’s not careful, and if that happens he’ll lose it completely. A wolf should never be cut off from his team. Nicole is the one who brings him around and the guys agree together that they should stand up and fight, but do it the right way.