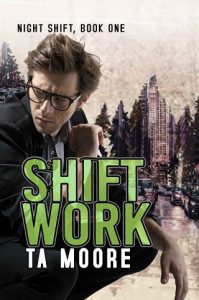 You’d think the werewolves would be the worst thing about the Night Shift; you’d be wrong.

All Officer Kit Marlow wanted was a cup of coffee and some downtime before his next night shift. Instead, he got a naked man in the elevator and an unaccounted-for dead girl in the morgue. He’s going to need to deal with both before he can head for his bed.

Or anyone else’s. Although not much chance of that.

Reluctantly partnered with the acerbic security consultant Cade Deacon—last seen naked in the elevator—Marlow delves into the dead girl’s life. Between them, they uncover a new crime scene with the whiff of old corruption. A corruption that, five years ago, nearly took Marlow’s life and ended his career.

Finding out who killed the dead girl on the slab might only be the start of this investigation. Oh, and it’s the second night of the full moon. So 80% of the city, including Cade, will turn into werewolves in the middle of the case.