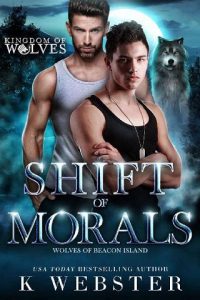 I found him when he was a boy.
Bloody. Mangled. Near death.
If I’d been a merciful Alpha, I would’ve snapped his neck and ended him right then.
Except, I didn’t.
Something in his big brown eyes tugged at my heart strings.
I kept him. Healed him. Raised him to be fierce, loyal, and brave.
Now that he’s an adult, everything’s changing.
He’s no longer the soft, scared boy I once thought he was.
No, there’s an uncontrollable anger inside him.
A rage-filled hate I don’t understand.
As a dangerous pack begins tormenting us and destroying our home, I feel him pulling from me as he seeks justice.
He thirsts for revenge, even if it means leaving our pack and going solo.
But, as his Alpha, I won’t let him go without a fight.
Each time he pushes, I pull him right back to me.
I’ll keep him locked in my arms or pinned beneath me forever if that’s what it takes to keep him.
A shift of morals has begun.
One I don’t understand, but certainly don’t resist.
I’m the most powerful wolf on Beacon Island. I don’t have weaknesses.
Until now.
This wild, reckless young man changed everything when he stole my heart.