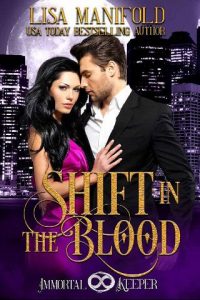 Everyone knows the art world is full of history and privilege. What not everyone knows is that it’s also full of thieves, forgers, and one very determined vampire.

Didier Hugo is about to lay eyes on the five long-lost paintings his human father painted centuries ago. When he became a vampire, Didier left his provincial French village and beloved father without so much as a goodbye. He longs to see the brushstrokes made by his father in these newly discovered paintings. And he can’t wait to steal them from the gallery and to bring them home where they belong.

Clara Manning has broken every rule her boss Maxim Popov outlined when they made their deal. She was his art forger and his art forger alone. Meeting with Didier Hugo has put not only her own life at risk, but the life of her little sister, who she vowed to protect after both her parents died in a brutal vampire attack. The offer from the reclusive art collector is a chance she didn’t think was possible. It’s enough for her and her sister to disappear and start over in a new, normal life.

The night the exhibit opens is one of opulence, fanfare, and many surprises. It’s a who’s who of the art world, but Didier is consumed by the alluring Clara. She is not only gifted, but beautiful, and she stirs his immortal heart in a way he never expected. Unfortunately, Maxim Popov can’t look away either. He watches from the shadows, seething at Clara’s betrayal.

Will Didier have a chance to explore the stirrings of his undead heart before Maxim exacts his revenge and rips Clara from him forever?