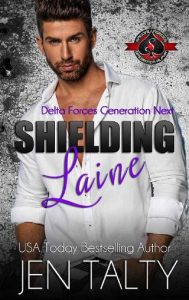 They had no idea how close their worlds were. Or how deadly.

All Laine West wants is a change of pace. Her move to Killeen, Texas is supposed to be a fresh start where she put down roots, come to terms with her past, and spends time with an old friend. But when an unexpected phone call from her mother turns deadly Laine finds herself in the middle of drug war with the Mexican Cartel that has nothing to do with her and everything to do with her past and her future.
Delta Force soldier, Knox Bentley lost his mother when she was murdered by the Cartel. Now his DEA agent father is missing. When his buddy Troy “Lucky” Schmidt asks him to help his friend Laine get settled, Knox looks forward to the distractions from his problems. Little did either know how intertwined their worlds were and now Knox must find out who murdered Laine’s mother before they come and kill Laine.