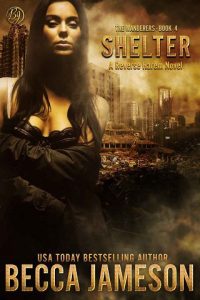 There is no safe place in the world anymore, especially for women. For several decades, the birth rate of females has been declining. Militants, the government, and private citizens alike will do anything to find young women and force them into unthinkable arrangements.
Against the darkness of this world stand The Wanderers—a secret society born to provide sanctuary for anyone who believes in free will and democratic notions. Their numbers are growing and their citizens live in safe, hidden compounds.
Serve and obey your husband. The Republic has drilled this command into Haley for the fourteen years she’s lived in a home for girls. Now that she’s standing at the altar about to marry an aristocrat she’s never met, Haley fears what those words could mean once she’s at the mercy of her new husband.
Braylon, Riggs, and Storm had always planned to escape The Republic someday. When Braylon meets the sweet, beautiful wife he’s expected to rule, he knows he could never harm her, including claiming her innocence. He’s not alone—Riggs and Storm are just as enamored with her. When Braylon’s mother decides her daughter-in-law hasn’t conceived fast enough for her taste, the three must find a way to get Haley to safety. The time to escape is now.
Rush was living with The Wanderers for three years when he was kidnapped and taken by The Republic. His new home: a holding cell in the basement of some aristocrats. His new job: father a baby against his will. When Rush meets Braylon and the others, he offers them a way out. Can they trust him? The trip will be long and dangerous, but they will risk it all to protect Haley. The first taste of freedom is the sweetest.
There will be challenges along the way. Militants are everywhere just waiting to attack men and capture women for their own. Haley may be surrounded by men who would move mountains to save her, but she’s got news for them: if they want to earn her love, they’re going to have to stop coddling her and let her fight alongside them.