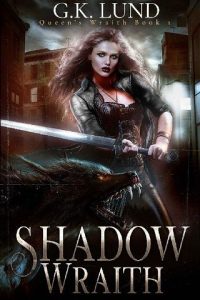 What if the biggest liar inside the organization you’re loyal to and depend upon… was you?

Duty is all Nadia Navarra knows as one of the Queen’s Wraiths in the subterranean city of Agartha. Working as an enforcer and assassin of rogue paranormal beings, a seemingly normal case turns unpredictable when the ghost of a child emerges—a ghost who is angered, powerful, and dangerous.
To make matters worse, Nadia’s old flame, Darrow, returns to the city, taking an interest in both her motives and the possibilities of the heightened powers of the ghost she is hunting.
Werewolf-vampire hybrids are killed on sight in Agartha, so why has he returned? Monsters like him are shunned, and yet Nadia begins to suspect he is not working alone… but who would join forces with an abomination such as he? And to what end?
As a Shadow Wraith, Nadia should kill him, or turn him in… but revealing her old and almost forgotten connection to him risks exposing the greatest secret of her life. One that cannot be revealed as long as Darrow breathes…