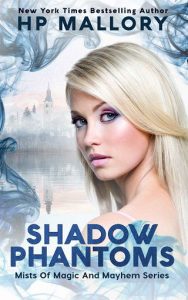 Welcome to the sexy world of magic and mayhem—of witches, vampires, fae and lycanthropes.

The order of the Underworld is no longer…

Where once factions of creatures—vampires, witches and warlocks, werewolves and fae—all came together, united under the banner of Queen Jolie, now those factions are separate and vying for control.
The vampires, unified under the authority of Master Vampire, Sinjin Sinclair, are living a life of hedonistic opulence aboard three cruise ships on the open water. Sinjin, bemoaning the loss of his one true love, can find little interest in anything else. But there’s a threat on the horizon, and one which will force Sinjin out of his melancholic lamenting…

Meanwhile the witches and warlocks have been separated into two factions: The King’s Alliance, commanded by ruthless High Mage, Duine and The Order of the Templar, a band of rebels, led by Pagan. While Duine seeks to control all witches and warlocks, subjecting them to his tyrannical rule, Pagan wishes to return magic to the hands of the people.

Amid the chaos of attempted assassinations and battle, is Emma Balfour. Now seventeen, Emma is attending the highly prestigious Elmington Academy—a school of magic. Unlike her witch mother and warlock father, Emma is anything but magical and finds her time at Elmington a struggle. That is, until she meets enigmatic Stone Draper. Stone is handsome, young and charismatic and Emma finds herself immediately taken with him. There’s only one problem… Stone Draper is actually Professor Draper, Emma’s instructor.