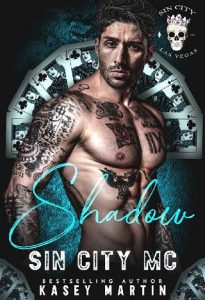 Shane “Shadow” Carpenter is a dangerous man with a stone cold heart. He has been a Sin City Enforcer for several years, and he lives by their creed. He does what he wants, when he wants, and to who he wants. He doesn’t suffer fools, and empathy is a foreign concept. However, when he has to collect on a debt owed to him, he is put in a situation he’d never imagined.
Teagan Walker is new to Las Vegas. She is a dancer who has finally caught her big break. Her tireless auditioning efforts have paid off, and she is set to be a performer in one of the biggest shows on the strip. However, before she can even start living her dream, her boyfriend owes a debt that she has to help pay. The problem is, neither of them has any money, and now she is thrust into a situation with a gorgeous killer.
Shane and Teagan go on a dangerous ride that neither of them expected. But, once it’s over, can they leave their baggage behind, or will they walk away?