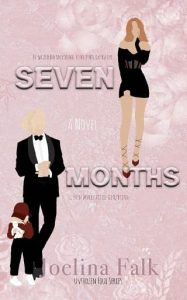 Emory Scott doesn’t have it very easy. With constant comparisons to her dead sister, she dreads her family, even when she loves them.
However, there’s something she hates even more than being compared to her sister. Or rather one other person; Miles King.
Miles King has lost the love of his life to childbirth, leaving him behind with a daughter to care for at the mere age of eighteen.
Brooklyn, the daughter he didn’t know he could ever love so much that her safety was the most important thing to him. He would do anything to keep her safely by his side.
So what happens when someone threatens to take Brooklyn away from him?
In order to appear like a man that has his whole life together, one that doesn’t still mourn the death of his girlfriend, even four years later; he only has one choice if he wants to impress the social services: Marriage.
Marrying the only person he knows cares about Brooklyn as much as he does should fix everything. And it sure helps that Emory can’t stand him, but loves his daughter, because it means there won’t ever be feelings getting involved.
But what if the one drunken night they had turns into something more than just a hookup? A baby, for instance.
What if suddenly two people that swore to never get involved with one another ever again, are now forced to learn how to coparent?
And what if during the months they have to spend together, they discover unimaginable things about their shared past?