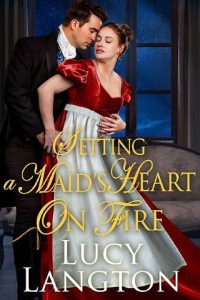 After her kind master’s passing Penelope Dupont’s life turns into ashes. Working as a maid for his abusive widow is a real nightmare, but things turn worse when a despicable Comte violently intrudes her world. Desperate to escape this tormenting life, she runs away using her younger mistress’ identity, but she soon finds herself tangled in another torment, named lust… Trying to escape her past, she runs into a seductive Duke who thinks Penelope is the French bride he is expecting.

What will happen when Penelope’s sinful secret is divulged?
Anthony Grafton sees his life changing in the glimpse of an eye. After his uncle’s death, he is forced to inherit the title of the Duke of Chattham’s for the sake of his sisters. Leaving behind his high-ranked position in the Army, he is stunned to learn that the dukedom is badly in debt, and the only way to fix it is to marry the Comte’s wealthy niece. Yet, when he meets the tempting Penelope, marriage becomes the most reckless adventure of all.

He was not looking for passionate love, but what will he do when it finds him?
Penelope and Anthony’s lives intertwine under the most unlikely circumstances. Once they taste each other’s sinful kiss they will be unable to tame their growing feelings. Lost in a sea of doubts, guilt, and scandal, can love be won from disaster? As their past appears to haunt them, once again, will they find the strength to fight against the cunning schemes or will their forbidden love be just a candle in the wind?

“Setting a Maid’s Heart on Fire” is a historical romance novel of approximately 80,000 words. No cheating, no cliffhangers, and a guaranteed happily ever after.