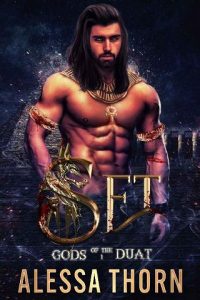 Once, Set had been a god of the deserts, with war and storms in his veins. He was a beast of cunning, strength and protection, annihilation and destruction…
Now, masquerading as a human mercenary, he was nothing but a thug for hire.
When his boss Kader summons him for a job to protect his secret daughter, Set thinks it’s going to be another boring day in Egypt. Then he sees Doctor Ayla Neilos in the flesh and the god inside of him wakes for the first time in centuries.
Before he was known as a god of war, Set had been a god of protection, and he isn’t going to let anything happen to Ayla, no matter the cost.
As a doctor used to working in war zones, Ayla thought she would be prepared for the worst kind of conflict. That is until she’s kidnapped and then saved by a massive mercenary determined to keep her safe.
Not only does Ayla learn her father isn’t dead, but she’s also being baby sat by a god of war. A god who isn’t exactly acting like the villain that the stories have made him out to be.
Trying to hide from bounty hunters is hard enough, but neither Ayla or Set is going to be prepared for what they awaken in each other. With half of Egypt wanting them dead, they will both pay the ultimate price to keep each other safe.