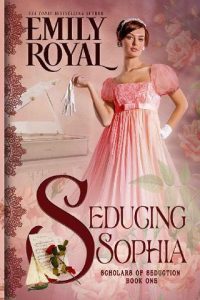 Dominic de Morigeaux, Duke of Peterton is determined to reclaim his childhood home, Summerton Hall. The once-elegant townhouse is now the property of the infuriating Mrs. Huntington, and occupied by hellions—enterprising women, each carrying a secret.
When Mrs. Huntington refuses to sell, Dominic hatches a plan with his friends, fellow Oxford scholars, to breach Summerton Hall’s defenses at its weakest point—the women. Each man will use his field of study to seduce the occupants and uncover their secrets.
But even the best-prepared general faces defeat if he underestimates his adversary…
After losing a bet, Colonel Adrian FitzRoy becomes the first scholar of seduction. His quarry is the widowed music teacher, Mrs. Black.
Sophia Black found sanctuary for herself and her young son at Summerton Hall, where she teaches the pianoforte. When she discovers her newest pupil is an army officer, rather than the usual insipid debutante, she turns him away. But his natural talent for music wins her over, and she agrees to an uneasy friendship.
As Adrian sees more of Sophia and little Henry, he questions his motives in seducing a woman for a bet—a woman he’s in danger of falling in love with.
Determined never to risk her heart again, Sophia struggles to conquer her attraction to the man who’s bestowed such kindness on her and her son. But when she learns of his past, she realizes that the secret she harbors could destroy their friendship and cost her the man she’s growing to love.