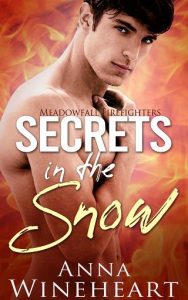 Divorced and a single dad, the thought of attending his cousin’s wedding fills Ben with dread. His own marriage ended in failure; he has no desire for another alpha. Except he had an alpha once—sort of. He’d grown up with Alec, and Alec had protected him, Alec had held him when he’d cried.

Until that messed-up Spin-the-Bottle game, when Alec had been forced to kiss Ben. Everything had changed in that instant: Alec had seen Ben’s desire. And he had left.

By himself, Ben has made terrible choices. He has gotten into trouble, and he’s still in trouble.

When he takes a chance and attends the wedding, he finds himself stuck in a cabin with a stepbrother who now hates him. Worse, his heat is approaching. The last thing Ben wants… is for Alec to discover how much Ben’s still in love with him.
(Spoiler: Alec doesn’t hate Ben at all. Alec has a crush, and he’s been keeping secrets. Secrets that involve Ben.)