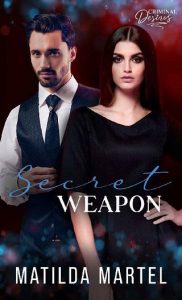 She’s a Park Avenue princess—untouchable and far beyond his reach. He’s the son of a mafia don, arranged to marry a woman he doesn’t want. Their union is forbidden but their chemistry is off the charts.
When she loses everything, her secret love becomes her secret weapon, and the pampered princess becomes a mafia queen.
Bianca Barnes grew up with the world at her feet. She lived a sheltered life with a doting father who provided for her every need. Weeks after his death, her slithering uncle stole her family’s fortune and left her penniless.
But she’s not taking it lying down.
She’ll get her revenge and take back what belongs to her.
She has a plan and a secret weapon who knows how to fight dirty.
Divo Talerico grew up far from Park Avenue.
As the eldest son of a mafia don, everyone expects him to take over his father’s position, marry an ally’s daughter and take on the most powerful don in Manhattan.
But Divo has other plans.
He’ll take his throne. He’ll have his uptown girl.
And together they’ll make their own way.
Villains do bad things, like lie, and cheat, and steal. But every bad guy has a backstory and every Bonnie needs her Clyde. This May, celebrate the villain.

Eleven sinful couples will burn down the city. When the dust settles, where will you be?
Criminal Desires, a steamy romance collaboration that’ll melt your eReader.
Happily ever after, guaranteed!