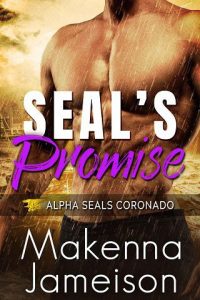 A dangerous hostage standoff at sea. An event planner caught in the middle. And a Navy SEAL who’ll risk everything to save her.

Navy SEAL Troy “T-Rex” Harrison doesn’t expect to see the pretty redhead he flirted with at the beach ever again. Her flirtatious smile and sexy curves might’ve made his heart pound, but when he had to rush off to base for an emergency, he didn’t get her name or number.

Event planner Caitlyn Thomas is ready to pull off the highlight of her career. She’s arranged an anniversary party for a high-ranking military officer and his wife. When the admiral is targeted by terrorists intent on stealing state secrets, Caitlyn is caught in the middle of the standoff. Taken hostage and out to sea with the admiral and his wife, she is shocked when the good-looking guy from the beach sneaks onto the boat to save them.

A SEAL team coming to her rescue is the last thing she expects—especially the ruggedly handsome man who made her pulse pound. Danger follows her home from the rescue operation though. Troy won’t let anything happen to her, but he won’t let her get away this time either.