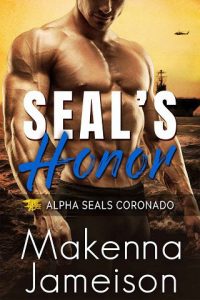 Navy SEAL Jackson “K-Bar” Clinefield is strong, silent, and lethal. He’s not interested in the flirtatious women always hanging around his teammates, but when he meets his buddy’s beautiful yet reserved neighbor, he can’t deny their instant attraction—even if he suspects she’s hiding something from him.

Taryn Miller is on the run. Her abusive ex-husband has tracked her across the United States, and she’s finally settled into a new life—and new name—in San Diego. When trouble catches up to her, leaving her bruised and badly shaken, Jackson is the one who rushes to her side. The massive and muscular Navy SEAL should terrify her, but he’s gentler than any man she’s ever known, and she feels nothing but safe and protected in his arms.

Discovering someone laid a hand on the innocent Taryn makes Jackson see red. He’ll stop at nothing to track down her abusive ex and won’t rest until the gorgeous brunette is safe in his arms and sleeping in his bed—forever.