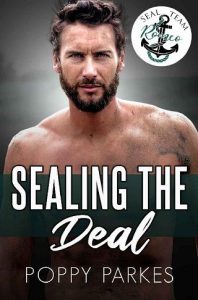 Will they deny themselves their second chance?

After being injured in a recon mission and almost losing his life, Navy SEAL Ford Franklin is left in a delicate state that requires him to go back home for rehabilitation. Having had such a close call, he starts questioning his life choices up to now. Sure, being a bachelor was fun for a while but, lately, a sense of loneliness creeps up on him at night—even if there’s a woman in bed with him.
Memories of his only love and high school sweetheart, Daisy, assault him every now and then; things have never been the same after her. And now, Ford wonders if it’s time for him to let go and find someone to settle with.
Daisy Hart has always had one dream: to set up her own P.T. office and help as many patients as possible. It’s just a coincidence that Coronado, California seemed like the best place to do it. And it’s also just a coincidence that she ended up serving mostly the SEALs in the Coronado base.
Working closely with so many of them, it’s impossible for her not to think about her biggest regret: breaking up with her high school boyfriend, Ford, when he enlisted in the Navy. Things seemed so hard then, so leaving him was the best choice. Now…she’s not so sure anymore.
When destiny gives them both a second chance, will they take it? Or will history repeat itself?