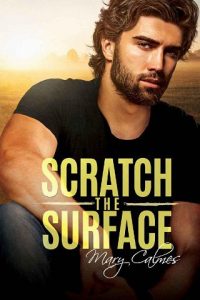 Sometimes things look one way, but when you scratch the surface, there’s more than meets the eye.

Jeremiah Wolfe has always done what was necessary to survive. On top of working two jobs, he’s going to school to become a social worker so he can give kids the help he never got when his mother left years ago. When a rare night off finds him with the chance to make a quick buck, he jumps on it. But his evening goes sideways, and he’s about to head home when he’s propositioned by a stranger. A meaningless one-night stand is simple and easy, so he steps into the hotel room—as he has many—without expectation. But the man behind the door is a surprise, as is the instant connection that builds along with passion and a glimpse of his heart. Small wonder that Jere can’t get the nameless man out of his head.

Cameron Gallagher has never been accused of being spontaneous. He’s an introvert whose life is about schedules, plans, and lists. He’s always been the careful one, so inviting a stranger into his bed on the lure of his gorgeous smile and warm brown eyes isn’t only out of his comfort zone, it’s entirely out of character. Surprisingly, when he wakes in the morning alone, it’s not regret he feels, but the need to find the man who held him in his arms all night. It seems crazy, but he can’t get the man out of his head.

When they’re brought back together, each man believes it’s more than luck. They feel as though they’ve gotten a second chance. Sure, love at first sight is just a myth, the stuff of romance novels, but the more they scratch the surface, the more they realize they’ve got a shot at something lasting.