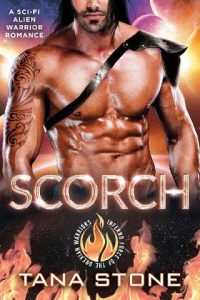 I volunteered to sneak onto an enemy battleship. Now I’m stranded on a prison moon with a hot Drexian pilot who can’t stand me.

I had no choice. It was either volunteer for a rescue mission for the Drexians or go to prison on Earth.
I know, I know. The irony isn’t lost on me. But what were the chances I’d end up on a creepy alien prison moon running for my life with a Drexian who seems annoyed that I saved him?
You’d think Jax would be grateful I used my considerable burglary skills to break him from the Kronock brig, but he looks at me like I’m dirt on the bottom of his boot. And I don’t think it’s because of my dodgy past back on Earth.
He’s got a grudge against humans. At least human females. Which is a problem since we’re stuck together on a swampy planet that’s too hot to wear much of anything.
All I have to do is survive until we’re rescued, and I’ll never have to see the aggravating Drexian again. If I can fight the urge to kill the annoyingly gorgeous alien for that long. Not to mention my urge to…