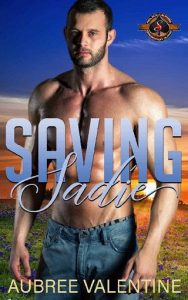 Hudson came from a long line of law enforcement officers hell-bent on making the world a better place. And when he failed to protect the one woman he loved, he vowed to spend the rest of his life making up for it by seeing to it that the person who stole her from him – and thousands more like him – were brought to justice.
What he didn’t count on was falling in love with his best friend’s older sister, Sadie Walker, along the way.
Sadie was a single mother who dedicated her career to piecing together forensic evidence that put all the bad guys away – like the dirtbags that assaulted women. And now it was time for her to take her career to the next level, back home in Austin, Texas.
Running into Texas Ranger, Hudson Clark, wasn’t part of her plan when she decided to move in with her younger brother but all too quickly she finds herself feeling things that she hasn’t felt in a long time.
There was just one problem…he’s her brother’s best friend and he reminds her an awful lot of the type of guy she swore she’d never fall in love with again.
Their newfound relationship is put to the ultimate test when their common mission turns up a new lead on something buried in Hudson’s past. He’s determined to do all he can to serve justice and save Sadie. But, this time, it’s Sadie who will end up saving him.