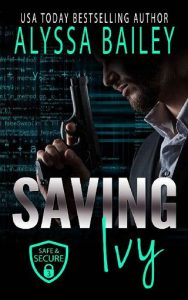 First, she stole his heart and left him bleeding. Then she stole from the Mob. Now he is the only one who can save her. Will his price be too steep for Ivy to pay?

Kaden was perfect for super-rich, too spoiled Ivy Linton. When Kaden rescued Ivy and then took her home, it was soon obvious to all that they were falling in love. Soon, however, the realities of the dangerous nature of his job frightened her. Her own crazy life was already scary enough, so Ivy left one evening without a word. She struggled to overcome the nightmares, the loneliness, and the loss of the only man she had ever loved. Now, a year later, the old worries were gone, but new troubles have emerged. Her mother is married to a mob boss, his second in command wants her, and she witnessed him commit murder. So, what should she do? Steal important information for life insurance and run like hell to the only safe person she knows.

Ivy was surrounded by trouble, but that’s what he was trained to deal with in the military and now with Reynaud and Associates, of which he was one. So when Ivy left without a word a year ago, he was crushed but let her go expecting her to return. She didn’t, until now. Amid the chaos of a bombing, his girl shows up full of secrets and the Mob on her tail, but she can still rock his world with a look. He was too gentle the first time. Now he must take control if he is going to keep her safe. And this time, he would make sure she stayed.