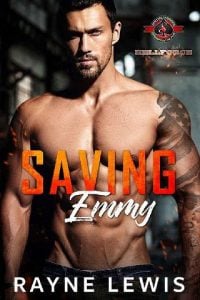 WHEN HER HAUNTED PAST COMES TO AVENGE HER WILL SHE SURVIVE TO TELL THE TALE?
Former Army Ranger Sniper, Ember “Emmy” Hayes has left her days as a lethal markswoman behind and returned to civilian life in her hometown in Texas. Years after leaving the battlefield, the battlefield has found her and her old enemy will go to hell and back to strike revenge against the one deemed the Devil Woman. Though she’s a member of Hellforce by proxy, her friendship with Eli has cemented her place in the group and the Alphas of Hellforce will rain hellfire to get back one of their own.
IS TRUE LOVE WORTH LOSING THE ONE YOU LOVE?
Elijah “Slate” Ryan has been in love with his childhood friend, Emmy Hayes, for as long as he can remember. Eli and Emmy grew up side by side after the Hayes family took him under their wing and mentored him when he lost his father at the age of five. Years of longing from the shadows and loving from a distance, Eli will decide if the adage is true, “If you love something set it free.”
Even if love is lost, Eli is determined to lay it on the line. And when his love is taken, he’ll go to hell and back to save the love of his life. John “Tex” Keegan helps Hellforce to bring back one of their own.

Saving Emmy is a full-length novel and the second book of the Hellforce series. It takes twists and turns that will have you on the edge of your seat but will leave no cliffhanger ending.