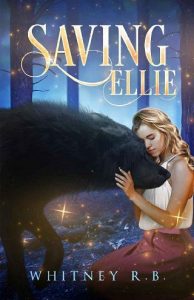 “I thought I would be used to pain by now, but I was wrong.”

Ellie may only be twenty years old, but she knows how to keep herself safe: keep moving and don’t get attached to anyone or anything. Nothing short of death will stop her foster father, and she refuses to let anyone else die because of her.
Ash may have been his parents’ obvious successor, but Zac deserves to lead the pack—even if Ash has to take beatings to prove it. There’s no need to challenge the ruthless status quo. He has nothing to lose anymore, so the best he can hope for is Zac’s acceptance.

That is, until a sudden Alaskan blizzard forces Ellie to choose to either freeze to death or shelter in a barn with a giant wolf. Little does she know that the wolf is Ash. Even as a wolf, Ash brings Ellie comfort, and all he knows is that he doesn’t want to leave her side. But now he has something to lose in his alpha’s vicious reign, and even though Ellie’s tired of running, she doesn’t plan to stick around. Their worlds are inexplicably intertwined, but can Ash challenge his alpha to show Ellie that his world of magic and his strength as a wolf can keep her safe? Or does their connection just mean that he will be the first to die because of her reluctance to leave?