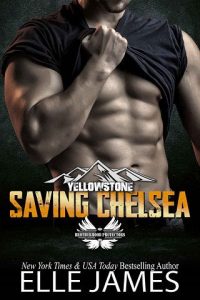 She prefers the four-legged wolves over the two-legged kind
Chelsea Youngblood’s first love is her only true love. Wolves. Raised on a wildlife rescue ranch, she grew up with wolves as her siblings. It was only natural she would become a wolf biologist and work with the wolves of Yellowstone National Park. When one of her pack is accused of killing a rancher, she makes it her mission to find the two-legged animal responsible.

Once bitten…never again
After a stint as a mercenary in Afghanistan, Ex-Navy SEAL, Benjamin “Bubba” Yates, lands a job with the Yellowstone division of Brotherhood Protectors. Certain the work won’t be nearly as dangerous as fighting the Taliban, he’s looking forward to fishing, hunting and disappearing into the peace of the Rocky Mountains. Until he runs into a woman being attacked by a wolf and gets involved in a case of murder.

While attempting to protect the wolf pack, Ben and Chelsea become the targets of angry ranchers and the real murderer.