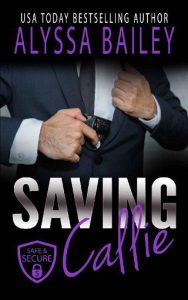 Loyalty is good, but blind loyalty can be deadly.

Garrett Sullivan and Katrina Long, known as Callie to Garrett and friends was in a serious dating arrangement. He loved her. He thought she loved him. They argued over her taking an undercover assignment into the dark underworld of the Mexican Mafia in Southern California. The next evening there was a note from Callie saying her dad was sick and she’d call when she got there. She never called.
After a year of pounding her family and Homeland for information where his girl was, his team found her but she slipped away when approached. Soon afterwards Garrett is told she is dead but he never believed it. Now, two years later, Sharlee receives a call from Callie who was in trouble but disconnected before she could trace her. Garrett’s primary goal is to get Callie to safety and after that, he doesn’t know.
Within a week, Homeland wants him to lead a team for a local job two years after Callie’s old employers had tried hard to distance themselves from him. Something fishy is going on and Garrett and his teammates will figure it out but in the meantime, they are determined to find and save Callie from whatever danger she is in before it is too late.
A second chance at loving Callie was miraculously in his grasp, if he doesn’t blow it.
Callie agreed to do a short undercover operation that turned into a long, nightmarish, two years. She kept far under the radar while keeping her father’s business out of mafia hands, stealing information from modern day gangsters, and her boss at Homeland Security happy. Now, finally, she has a second chance at loving Garrett, if he wants her. It might be too late.