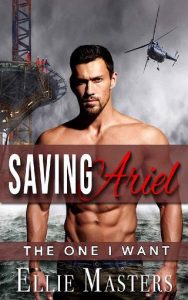 If they want their happily ever after, they’ll have to fight Mother Nature for it…

Any romantic notions he had died with his wife, despite her dying wish that he find love again. His focus is on raising his daughter as a single dad, and keeping his offshore oil rig crew safe. As his crew evacuates in advance of Hurricane Julian, a category five monster barreling down on the gulf, disaster strikes. Two of his crewmen are critically injured. He needs to get them to safety before the hurricane hits. When the aeromedical rescue helicopter pilot turns out to be a woman, he’s surprised. When she falls into his arms, his entire body takes notice. The tough, gorgeous, pilot is everything Aiden thought he’d never have—or want—again. Can Ariel be the one? His second chance at love?

Too bad the storm seems to have other plans for them…

With a category five hurricane barreling down on the Gulf, helicopter pilot, Ariel Black, is on a mission to evacuate wounded men from an oil rig. When the massive storm arrives ahead of schedule, it grounds Ariel’s helicopter, trapping them on the oil rig. She and her men, along with Aiden and his wounded, must ride out the storm. It’s the worst possible time to fall in love, but she does. Ariel falls hard…right into the installation manager’s arms. Aiden Cole makes her heart race, her pulse pound, and the butterflies in her stomach soar. Could he be the one?

Will the storm of the century destroy Aiden and Ariel’s chance at happily ever after? Or does fate have something else in store?

Saving Ariel, a steamy, second chance, contemporary romantic suspense, about love at first sight. It features a protective hero and the smart, feisty heroine who steals his heart.