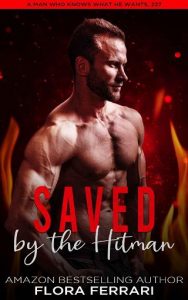 Saved By The Hitman by Flora Ferrari – Free eBooks Download

I’ve finally found a life worth living when the Bratva targets me for execution. I’m working as an event planner with my best friend, Patricia. I’ve got a beautiful little Chihuahua, Rebel.

Things are looking up.
But then my whole world is turned bloody and violent. The Bratva sends a hired killer to take my life—Jett Jackman, a forty-two year old man dripping in experience, his hair iron, his massive body rock hard with muscle.
I don’t stand a chance against him. This ex-SEAL is going to make quick work of me.

But instead of carrying out his orders and taking my life, Jett does what a hitman is never supposed to do. He refuses. He rescues me and, together, we go on the run from the Bratva.
I don’t know why he’d take such a risk for me. With his square jaw and his azure eyes, the faint silver shadow of a beard glistening on his cheeks, he wouldn’t look out of place on the cover of GQ. I’m curvy and shy and naïve and I’ve never even had a boyfriend. I’m a virgin to top it all off.
What the heck could he want with me?

All I can do is try to keep myself alive. Or at least that’s what I think at first. Then one night he comes to me, this seven-foot alpha, and he tells me the real reason he took me away from the Bratva. I can hardly believe it when he says that he wants me, all of me, that I belong to him now. He owns me.
And then Patricia reveals a secret that threatens to shatter everything. I always thought my parents died in a fire when I was young. That’s why I’m an orphan. A terrible mistake. But the truth is much more sinister.

Can we get through all the heartache and pain to finally claim our star bright future? I don’t know. But I’ll never stop fighting for it.