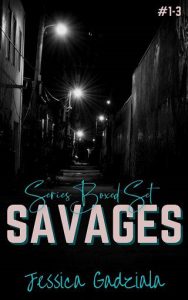 ALL THREE BOOKS FROM THE SAVAGES SERIES IN ONE PLACE!

MONSTER:
Alex has had one mission since she was sixteen: destroy the man who destroyed her life.
And all was going to plan until one night, a huge mammoth of a man breaks into her apartment and kidnaps her, holding her hostage for the very man she was bent on bringing down.
Breaker has one rule: he doesn’t deal in women.
But when he’s conned into a job for the city’s most ruthless crime lord, he finds himself in charge of a fiery-tempered hacker who he can’t seem to keep his hands off of.
When passions ignite and feelings emerge, will Breaker be able to reconcile his loyalties before it is too late or
will their shaky foundation of trust start crumbling beneath their feet?

KILLER:
Shooter: I ran away when I was fifteen and never looked back. I built a new life: good friends, wild adventures, and an endless parade of gorgeous women. But then I got a call that changed everything; a call that told me it was time to go back and face my demons.
I never thought I’d find an angel along the way…

Amelia: He was the absolute last thing I needed in my life: someone incapable of taking anything seriously, a notorious ladies’ man, oh, and did I mention… a killer? As in, he shot people. For a living. Yeah, definitely someone I had no plans on letting in. Except, he set his sights on me and, well, when a man like him laid on the charm, he did it thick and in a way that made you never want him to stop. My only saving grace was that he was only in town for a few days.
But when I found myself in a situation and he was the only one who had any answers, well, let’s just say… things got complicated…

SAVIOR:
Elsie has a problem. She has a mystery she is bent on solving, a mystery that led her to run for her life down the streets of Navesink Bank until she found herself rescued by a sexy stranger.
Paine has a past. He’s done everything in his power to move on from it, to distance himself from the things he has done. But then one night he finds himself saving a woman whose naive dabbling in matters she doesn’t understand threatens to drag him right back into the world he had done unspeakable things to escape from in the first place…