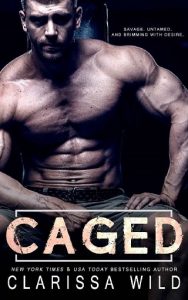 Contains more than a 1000 pages of brooding men claiming the women they crave.

Includes:
Book 1 – CAGED:
They call me savage. An untamed beast.
I was born in the cage. Born to fight. Born to carry its name.
Locked away, I’ve spent years waiting for my mate.
I’m pent up with need. Brimming with desire.
All I want is her… That beautiful girl from the picture on my prison wall.
Now she’s finally here, sharing a cell.
So close. So hard to resist.
But one thing’s for sure…
Even if she doesn’t know it yet, she’s already mine.

Book 2 – LOCKED:
People say I’m ferocious. Wild. Dangerous.
They’re right. That’s why I live on an island alone.
The jungle is my home. My personal prison.
Until she arrived.
The moment her helicopter crashed on my land, everything changed.
She’s the only survivor … And I’m keeping her locked up in a pit.
It’s been too long since I last touched a woman, especially one so beautiful.
It makes me hunger for her.
I want her … So I’ll keep her …
And I’ll make her mine.

Book 3 – CHASED:
I’m filthy rich … and ruthless.
I live for the hunt. The chase.
My desires aren’t exactly normal.
But neither is she … The girl I bought.
She’s innocent and blind.
Perfect for all my wicked needs.
Perfect to prove just how far I’m willing to go.
But there’s just one problem …
I’m falling for her. Deep. Hard. Fast.
Even though I’m the bad guy. The man who keeps her locked away.
I’ll do anything to make her stay.
One thing’s for sure … She will be mine.

Book 4 – BRANDED:
She was supposed to be my forever.
Instead, I became her worst enemy.
I fell for the one girl I could never have…
And it destroyed us both.
I did a bad, bad thing.
But she isn’t exactly innocent either.
When I’m faced with the ultimate choice – Let her die or save her – I grab her and run.
She calls me a monster. The devil himself.
No one will take her from me.
She’s mine to punish.
Mine to keep… forever.

Book 5 – HANGED:
Criminal. Outlaw. Murderer.
That’s only a few of the names people call me, and all of them are true.
I did the unforgivable. I killed a man in broad daylight.
I did it for her.
I paid my dues, did my time.
Now I’m out and I want her back, no matter the cost.
She hates me, but that won’t stop me from hunting after her.
I need her to be mine again.
And there’s a secret I have to tell …
But everything has its price.
I’m willing to pay.
Is she?