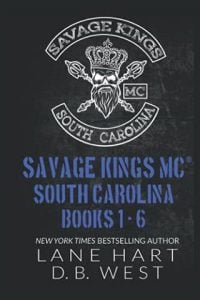 Are you ready to meet the smoking hot bikers of the South Carolina Savage Kings MC?

~ Roman ~
Roman McNamara is not only the president of the Savage Kings of Myrtle Beach, South Carolina but he’s also the king of one-night stands.
There’s just one woman Roman can’t get off his mind no matter how hard he tries…
When tragedy strikes during a bachelorette weekend, Roman and Charlotte’s paths cross in the most unexpected way.
Charlotte has no idea that Roman served in the Marines with her husband, or that he’s been keeping an eye on her for years, all while continuing to keep her husband’s secrets.

~ Winston ~
Winston Prescott has been a grumpy SOB for the past ten years. None of his brothers in the Savage Kings MC knew why, not until the day one of them made the mistake of posting a sexy centerfold on the wall of the clubhouse.
The gorgeous model posing topless on sports cars and motorcycles isn’t just any girl. Her name is Zoe Donahue, and she also happens to be Winston’s stepsister.
While the two haven’t spoken in years, Winston will do anything it takes to earn Zoe’s forgiveness. And this time around, he isn’t going to let her leave without putting up a fight.

~ Verek ~
Verek Rhodes is playboy royalty in South Carolina. As a member of the Savage Kings MC and the manager of a nightclub, women were easy come, easy go in his life, until he met Tessa.
Tessa Singleton was getting ready to marry the man of her dreams before her entire world came crashing down.
Eventually, she’ll have to face her past and make a decision about who she wants to be with. Will she choose the man she once loved or the biker who saved her from her nightmares?

~ Conrad ~
Conrad Erikson thought that doing the police chief a favor would be an easy assignment, one that could ultimately benefit the Savage Kings MC in the future. All he has to do is pick up the chief’s daughter from college and bring her home.
What could possibly go wrong?
When it comes to the chief’s daughter Hannah, the answer is anything and everything.

~ Cannon ~
When the livelihood of the Savage Kings MC is threatened, Cannon Erikson steps up.
Madison Monroe has never had anyone to rely on except for herself. She worked her ass off chasing her dreams, earning a law degree, interning with political campaigns, and now, finally, going after her ultimate goal – making her own run for public office.

Unfortunately, not everyone in this world has the same moral compass as Madison. She’s never dealt with a dirty opponent, one who will cross every ethical line just to hurt her and undermine her campaign.
When the former chief of police comes after Madison with all the resources and connections he still has in the city, Madison will have no choice but to turn to an unforeseen ally – Cannon and the Savage Kings MC.

~ Nolan ~
Nolan is a convicted felon, searching for his place in the world without screwing up his probation.
The last thing he needs is a giant oaf from a rival biker gang showing up at the MC’s clubhouse, threatening to kill Nolan if he doesn’t give his estranged wife, Rita, a divorce.
The funny thing is, Nolan is certain that he has never been married.
The name Rita does, unfortunately, ring a bell – she’s the reason he went to prison.