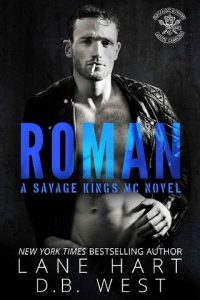 Are you ready to meet the hot alpha bikers of the South Carolina Savage Kings MC?

~ Roman ~
Roman McNamara is not only the president of the Savage Kings of Myrtle Beach, South Carolina but he’s also the king of one-night stands.
Growing up in a tourist town where there’s a party every night means living up the good life with no commitments to anyone but the MC.
There’s just one woman Roman can’t get off his mind no matter how hard he tries…
Five years ago, Charlotte Newsom’s husband, Adam, died for his country. She hasn’t been able to move past the death of her best friend and soulmate and fears she never will.
When tragedy strikes during a bachelorette weekend, Roman and Charlotte’s paths finally cross in the most unexpected way.
Charlotte has no idea that Roman served in the Marines with her husband, or that he’s been keeping an eye on her for years, all while continuing to keep her husband’s secrets.

~ Winston ~
Winston Prescott has been a grumpy SOB for the past ten years. None of his brothers in the Savage Kings MC knew why, not until the day one of them made the mistake of posting a sexy centerfold on the wall of the clubhouse.
The gorgeous model posing topless on sports cars and motorcycles isn’t just any girl. Her name is Zoe Donahue, and she also happens to be Winston’s biggest regret.
While the two haven’t spoken since the day Winston reluctantly let Zoe go so that she could pursue her dreams, an explosive reunion is on the horizon.
Zoe’s been holding a grudge against Winston for how things ended the day she left. While she’s home for a week, her plan is to torture the brooding man by wearing as few clothes as possible while promising Winston that she’ll never let him touch her again.
Winston will do anything it takes to earn Zoe’s forgiveness. And this time around, he isn’t going to let her leave without putting up a fight.

~ Verek ~
Verek Rhodes is playboy royalty in South Carolina. As a member of the Savage Kings MC and the manager of a nightclub, women were easy come, easy go in his life, until he met Tessa.
Tessa Singleton was getting ready to marry the man of her dreams before her entire world came crashing down. She’s spent the past few months in therapy, trying to heal her emotional wounds.
The one ray of light in her bleak world is Verek. Being with the easygoing biker keeps Tessa distracted from the darkness.
Her fiancé Paul, on the other hand, doesn’t have a clue how broken she is and probably never will since Tessa can’t find the courage to open up to him.
Eventually, Tessa will have to face her past and make a decision about who she wants to be with. Will she choose the man she once loved or the one who saved her from her nightmares?