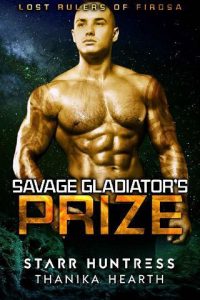 I risked everything to have her. I will not let her go.
Voxx has entered the most dangerous gladiatorial tournament in the known universe, and won. He gets to name his prize — anything he desires — and his choice is clear: a bride.

But when Raleigh is tricked into an alien wedding ritual on a strange, desolate fringe planet, she isn’t quite as pleased with this turn of events as her new husband is… Her choice: remain trapped with a savage alien warrior on a gladiator arena planet forever … or enter the games herself, for a slim chance at that infamous prize, and her freedom. One slight hiccup: is she catching feelings for her own husband?

Warning! This series contains lost kings and the heroines who find them. It also contains scorching heat, sweetness, and everything in between.