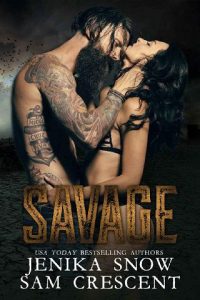 The Virus.
That’s what they called it, the lone thing that had the ability to wipe out mankind—the lone thing that did just that. Those who survived were immune, but death might have been a better outcome than the world they now lived in.
Sasha and her younger sister Lucy were trying to survive this new, desolate existence. They’re on their own, savaging this now ruined world. Those who survived might be friends but more than likely they’re enemies.
Then they learned about a safe community up north, and although they should try for it, fear keeps them rooted. But movement is life and staying in one place too long would mean death.
Then fate made that decision for them, one that forces their hand and makes them flee the new place they called home.They have nothing else to lose, even if it turns out to be a dead end.The road is a lonely place when it’s only two, and hunger is a nasty villain.
There’s violence and degradation. There’s anger and immoral needs.
And then there’s Malachi.
He came into their lives at the perfect time, saving them, protecting them. And Sasha felt desire for the first time in her life. She also felt fear. He’s barbaric and ruthless, with wild eyes and a cunning gaze. He’s a criminal with a tattooed body, his former life now a distant memory. This new existence had changed everyone and everything, and all who now lived within it were warped, twisted.It was kill or be killed.
But Sasha would do anything to keep her and Lucy safe, and so she strikes up a deal with the savage, knowing she could use her one currency to get them out of this.Her body.
She’ll stay with him, be whatever he needs, whatever he wants as long as he helps them get up north so her sister has a chance to survive, to be part of a community again.
She’ll do whatever he wants so long as he kept them safe.
And he agrees
She’s now his… the property of a savage who will use her because he now owned her.