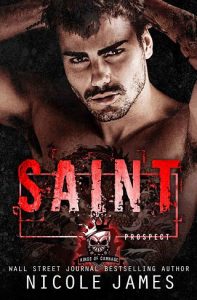 I’m no longer the little girl he once knew, one who believed in fairy tales.
And he’s no longer the white knight I believed him to be.
How can he be when he shows up on a black Harley wearing leather and biker boots?
I didn’t want this, but the decision is out of my control.
Now I’m his.
I have to remember this is only temporary.
I can’t let the way his predatory gaze sets fire to my body fool me.
Because I’m just a debt he’s paying, and I can’t risk my heart by letting myself believe it can ever be more.
Not with a man like him.
He’s dangerous, and only focused on one thing—securing his place with the baddest MC in town.
He’s no longer the boy I remember when I was nine years old—the one who helped me when I got stuck in a tree. The one who climbed up, wrapped an arm around me and hauled me down to safety, calling me short cake.
He was my savior then—a childish crush—but we’re no longer children.
Now he’s a stranger.
Now he’s my husband.

I took her with me because I had no choice.
If I owe a debt, I pay it.
I owed her mother a favor, but I never expected the repayment to include marrying her seventeen-year-old daughter. When she begs me to take Kami with me to protect her, do I have a choice?
Besides, it’s only temporary. Just until she turns eighteen.
Only 90 days to go.
I can resist her that long, right?