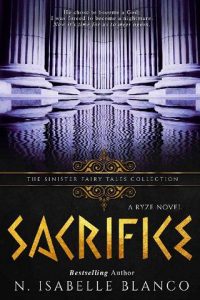 Megara:
We all know the story.
How it ended.
He survived and conquered each task.
Became the hero of all heroes.
And in the end he became a legend.
What no one told you is that I was there. I was helping him . . . and when he ascended, I was left behind to rot.
Herakles never knew I sold my soul for his success—he didn’t need to. Had I been enough on my own, he would’ve chosen to stay.
Instead, he rose to full glory.
I was dragged straight to Hades.
Beaten.
Violated.
Broken.
Eventually, mutated.
I lost track of him for nearly three millennia, but I’ve found him.
I will kill him.
He chose to become a god; I was forced to become a nightmare.
Now it’s time for us to meet again.

Herakles:
I abandoned my family mere moments before the Greek pantheon fell.
‘Till this day the whispers accuse me.
Had I been there, perhaps they could’ve been saved.
But I no longer gave a fuck.
Funny how vanity can blind a male to what really matters.
It took less than a year on Olympus before I began searching for her again.
I never found her.
Now, two-in-a-half-thousand years later, here I am.
Alone.
Empty.
An immortal ghost, simply getting by.
I should’ve never left her.
The only thing I had was hoping the last of her mortal days, wherever she ended up, were happy . . .
Joke’s on me.
A darkened, twisted version of my female returns, demanding my head for every one of my sins.
And she shall have it.
But first, I’m saving her from her curse.
I’ll sacrifice every ounce of my sanity left to free her . . . right before I let her end me once and for all.