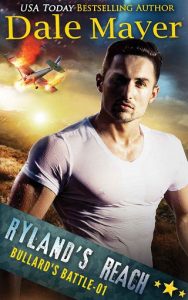 His rescue from the ocean after a horrible plane explosion was his top priority, in any way, shape, or form. A small sailboat and a nurse to do the job was more than Ryland hoped for.

When Tabi somehow drags him and his buddy Garret onboard and surprisingly gets them to a naval ship close by, Ryland figures he’d used up all his luck and his friend’s too. Sure enough, those who attacked the plane they were in weren’t content to let him slowly die in the ocean. No. Surviving had made him a target all over again.

Tabi isn’t expecting her sailing holiday to include the rescue of two badly injured men and then to end with the loss of her beloved sailboat. Her instincts save them, but now she finds it tough to let them go—even as more of Bullard’s team members come to them—until it becomes apparent that not only are Bullard and his men still targets … but she is too.