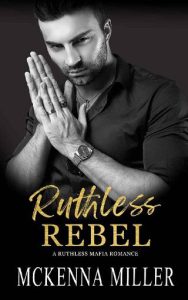 My brother started a war that put me squarely in the enemy’s territory.
It was all about finally exacting revenge for our family, but the plan required me to give my false allegiance to a hated Vivenzo. In return for this new alliance, I was gifted Luca’s one and only daughter, Dia, as collateral until we’d both proven our loyalty to one another.
The only thing I intended to prove was that the Vivenzo family was meant to suffer and die for killing our father.
But first, I had to integrate myself into their world, and Dia was the perfect pawn to make that happen.
Sleeping with the enemy’s daughter was never part of the plan, but Dia Vivenzo was an irresistible siren despite us being enemies—and, I later learned, an assassin who had every intention of killing me once I’d given her father all the information he needed to take down my family once and for all.
Good thing I planned on killing her first.
Both our families intended to wipe out the other, and only one would survive the war.
But what will happen when the one woman I should hate the most becomes the one I can’t live without?