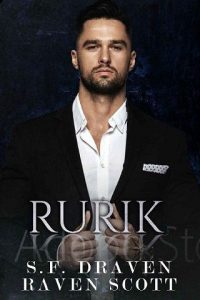 Rurik Volkov desperately wanted a fresh start in life, after following in the footsteps of his brothers, and watching them build their own criminal empires, he realized it was time for a change.
He sought out one of the most dangerous mafia bosses in the country, asking him for a loan to kickstart his criminal enterprise, but little did he know, that would mean signing away his freedom..

Ever since Rurik met Mr. Andreyev, he’s been looking for a way out, and he learns of a woman he’s supposed to track down, knowing that she could’ve very well been his ticket to freedom..
Rurik longed to know about Marianna, about why she was trying to get close to such a vile family, but he never thought that he would ever have to put her wishes before his own..
Rurik and Marianna embark on a journey together to defeat one of the most infamous crime bosses either of them has ever seen..

Rurik is determined to keep Marianna safe, but that might change once he learns about her true identity, and what her connection to the Andreyev Family truly is..
Rurik wants revenge for all of the years Mr. Andreyev took away from him, but his fight for justice may cost him his life..
Rurik knows that the closer he gets to the truth, the further it’s going to push him away from Marianna, but nothing is going to stop him from destroying the man that ruined his life.

Will Rurik manage to take down Mr. Andreyev once and for all or will his love for Marianna be the one thing that keeps him from ever truly getting revenge?