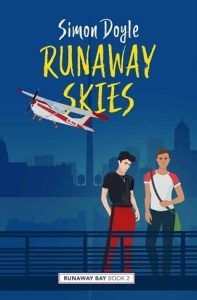 19-year-old French student Kaiser “Kai” Kateb has too many secrets to keep. And to his deeply religious parents, the fact that he’s gay isn’t even the worst of it—He’s the only one who knows what happened to his sister the night she disappeared six years ago.
So when Kai travels to Ireland for university, his goal is to leave all those secrets behind.
Caleb Burke has had a change of heart. Literally. But that doesn’t stop him from wanting to escape the overbearing care of his attentive mother. With a need to push the boundaries of life, he has his eyes set firmly on the skies.
One is afraid of living. The other has stared death in the face. And as Kai’s secrets come to light, they’ll need each other more than ever.

But can they overcome their fears together? Or is the truth too difficult to bear?