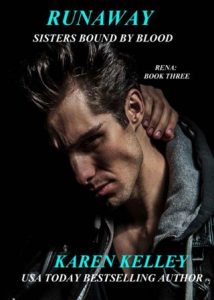 Their father sold Jade first, then Savannah. Would she be next?

When the shiny black car pulls up in front of the home where Rena lives with her alcoholic father, recognition then fear ricochet through her. She knows what her father is doing, and when he yells for her, she stays hidden in the woods until they leave.
But her father returns before she can run away. When he starts beating her in an attempt to hold her captive, she fights for her life…she doesn’t mean to stab him. Now she’s on the run and about to enter a world completely foreign to her, and she’ll do whatever it takes to survive.
Four years later:
When DEA officer Sean Donovan goes undercover to bust an illegal fight club, his hands are full with the tough and rebellious, no-holds barred fighter they call Tornado. One solid right hook, and she almost breaks his jaw. He’s ready to throw the book at her, but the captain has other plans.
Francesco is a major player in the drug world, but he has a weakness—underground fighting. They’ve been trying to catch him for years, but he’s always been one step ahead of them.
Until now.
Tornado, aka Rena, and one of the best Mixed Martial Arts fighters in the underground illegal fighting arena, is going to help them capture Francesco by pretending to be Sean’s lover. It’s either that, or he’ll lock her up and throw away the key.
He doesn’t realize how difficult it will be living with her all day…and all night.