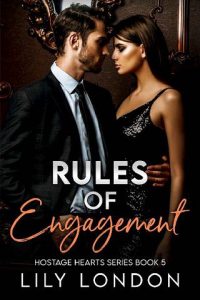 Cecily Young has been fighting for her daughter, using her past to give her the strength to soldier on. No price was too high, not even committing criminal acts to get the information that Lincoln was hanging over her head.

Grateful that Chase is willing to play along, Cecily works to do the dirty work Lincoln requires. Lincoln may think he can profit financially from their efforts, but he’s playing a dangerous game. Cecily and Chase are still his enemies, even if he’s using her daughter’s whereabouts as leverage.
When Cecily and Chase failed to acquire the biological weapon Lincoln sent them after, he decided to dissolve their partnership in an extreme way. However, the bullets meant to kill them never came. An unknown someone shot Lincoln instead.

Cecily wouldn’t care, except Lincoln is still her best bet for finding her lost daughter. She’s going to have to convince Chase to keep the man alive despite everything Lincoln has done to them. Plus, there is a new player on the chessboard. They’re going to have to stay one step ahead of an enemy they didn’t see coming. Can they keep Lincoln alive when one of his enemies comes to collect on a debt long overdue?