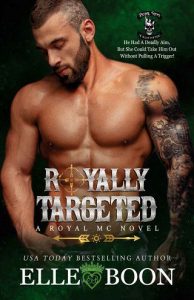 Tiana Royal…. She’s no stranger to making mistakes. She made the biggest one of her life when she was just seventeen and nearly lost her life. Fortunately, she had the Royal MC to drag her from the gutter and help set her on the right track. As penance for the poor choices of her past, she chose to suppress her own needs and wants in her own way until she can’t any longer, and then she does the only thing she can…she runs.

Mick Jackson aka Archer…. The last thing anyone would call Mick is a hero. As Enforcer for the Royal MC, he is the exact opposite of what Tiana needs and as his Prez has said, he’s to keep his hands and dick to himself when it comes to his sister-in-law. When Tiana runs off to college halfway across the country, he breaths easier for a time. That is until he’s tasked with the others to help her return home. When she reveals the truth about her abduction all those years ago, he does what he does best, protects her from everyone, but that includes getting as close to the woman he was told not to.