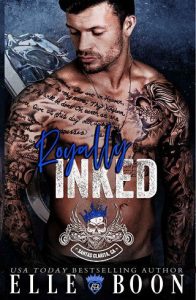 He Was Damaged. Broken. Inked.
Until He Met Her

T-Rex aka Rhett to his family back home in Louisiana… He’d come to California for vengeance and stayed because he’s too broken to go back. As an enforcer for the Royal MC he carries out his duties with unquestionable determination. His vow, his oath is to protect his club and his brothers at all costs. Settling down with one woman isn’t part of his plan.

Lux Donaldson tattoo artist and fixer of men… She’s not your typical California girl. She’s met a lot of men; most are nothing but liars and cheats. When she meets T-Rex, she knows he’s unlike any other man. He’s not only gorgeous, but he’s a walking heartbreak for a girl like her.

When her past crashes into their present and danger comes knocking on her door, T-Rex’s fierce desire to protect pushes forward. Lux realizes he’s just the man that might be worth taking a risk on, and he also might be the guy who breaks her. T-Rex didn’t think he’d love a woman, but he’d do anything to show Lux she didn’t need to guard her heart, if he can keep them both alive long enough.

*Royally Inked is written as a standalone. You don’t have to read the other books in this series to enjoy this one.