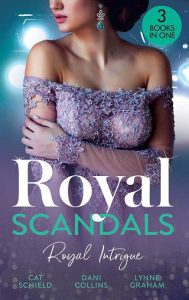 When royal duty calls, the bachelor Prince Christian must settle down and produce an heir. An encounter with former flame Noelle yields a bombshell discovery: he’s already a father! Marrying Noelle will make his boy the legitimate heir. But it’s a rocky reunion as Noelle refuses to fall in love – or in bed – with Christian ever again. But what the prince wants, the prince gets…
For one night, reclusive heiress Trella throws off the fear-ridden shackles of her childhood abduction. But her sizzling night of seduction leads to pregnancy! Deeply uncomfortable in the spotlight, Trella can’t bear a high-profile pregnancy and keeps the identity of her baby’s father hidden… Until a tabloid photo of their kiss implicates Crown Prince Xavier in the scandal.
Prince Jai knows a relationship with Willow, the captivating virgin he found passionate oblivion with, is impossible. Yet haunted by their powerful bond, Jai can’t resist seeking her out…only to discover his hidden heir!