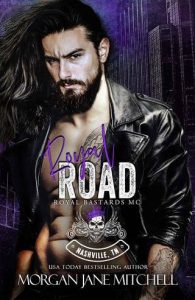 Welcome to Royal Road, playground of the Royal Bastards MC, Nashville, TN Chapter
Beau Strick aka Kingpin, President of the Royal Bastards MC in Nashville, Tennessee has never let his twin brother, Country Music star Beau Strick’s use of his real name bother him. After all, he’d hate to be the one named Bubba. The fact most of his brother’s hit songs are actually the soundtrack to his tragic life never truly fazed him either until he saw Maddy Mae on his brother’s arm.
Word travels fast in these parts. As soon as Maddy Mae moves home to Music City, she has a call from her high school sweetheart. She thinks twice about answering. Sure she knows he’s famous now. He could finally be her ticket to success as a songwriter, but her heart shattered long ago when Beau went to prison. That heartache’s something she never wants to experience again. Meeting up with his brother Bubba seems innocent enough until she finds herself falling for his persona. Bubba’s like loving Beau without any of the baggage.
Why did they ever head down Royal Road?
Nashvegas is full of honky-tonks but none as infamous as Royal Road where the Royal Bastards MC rule. Confronted with her old flame, the real Beau Strick and all his demons, Maddy’s torn between two identical brothers. Well, they used to be identical. Now, the real Beau looks nothing like the clean-cut Country Music star who sings about his hard knocks. Kingpin’s long hair and tattoos, the rev of his Harley calls to something wild within her.
Maddy Mae is the one thing about Kingpin that hasn’t changed. His love for her is the last thing left of his soul. And she’s the only thing he won’t let his brother take from him. His twin has plenty of money and influence in Music City, but Kingpin controls its underbelly, not to mention an army of outlaws on Harleys. He’ll go to war if he has to. Whether Maddy Mae agrees doesn’t matter. Kingpin will do anything to convince her there’s nothing better than the real thing. Even if that means seducing her adult daughter, Sky.
Finding out Kingpin is not her real father, Sky agrees to help him win her mother’s heart. She never thought she’d fall for a man so much older than her. But Sky falls, just as her mother gives in.
Kingpin never thought he’d want someone as much as his old flame. Of all people, Sky proves him wrong. With everything he wanted from his past within reach, who will he choose for his future, and will she have him?