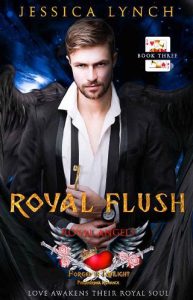 An immortal angel, Micah used to look forward to his forever—and then she disappeared…

After existing as one of the Fallen for millennia, Micah had started measuring time in decades and centuries instead of seconds and hours. The youngest of the three angels of Sin City, he was content to prove his loyalty to Raze and Sam while entertaining himself with a new hobby here or there to occupy his long, immortal life.
He’d mastered shepherding. He had circumnavigated the globe before Magellan had—and he barely relied on his black wings. He worked on laying track for the railroads, and when his waning celestial aura became a nuisance, he helped his brothers build and run the most infamous faction-owned casino in all of Las Vegas.
And then, four decades ago, he decided to try his hand at magic—and he met Phoenix.
His soulmate.
Before he had the chance to claim her, though, his witch lifemate seemingly disappeared. Declared dead by her coven, Micah has spent the last forty years as the faction’s cautionary tale. Especially now that the only way to break Lucifer’s curse and earn a return trip to Heaven is by all three royal angels finding their talisman and their fated mates.
Raze has Becca. Sam has Polly.
Polly had their talisman—until a raven-haired witch called Cinder uses her familiar to snatch it out of the human thief’s hand.
A witch that looks strikingly like the one Micah loved, then lost. And who makes his aura ping in recognition.
She’s his soulmate, even if she swears she’s never met him before…