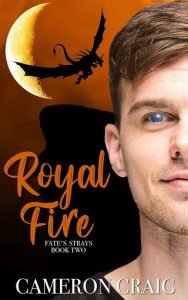 Blaze: I came to the capitol to bring my brother his belongings since he was settling in with his mate in the palace. I did not expect to find a mate of my own. And I really didn’t expect my mate to be the Prince. Now we’re wrapped up in a conflict with one of the neighboring kingdoms, we’ve seem to have adopted an adult, and we haven’t had more than a few minutes alone since we found out we belonged to each other. I guess the old saying “when it rains, it pours” is applicable in this situation.

Rowan: I’ve been in a magical sleep for almost five years. All I knew was darkness, all I felt was alone. Then when I opened my eyes I saw the most handsome man I had ever seen in all my life. I knew he was mine from the first flutter of my eyelashes. However, my mate wasn’t the most pressing issue. As soon as I woke up, I was thrust into a situation concerning the kingdom that attempted to kill me with poison, the kingdom that was part of the reason I was stuck in a magical sleep for almost five years. I wasn’t prepared to deal with this mess, and truth be told, I really didn’t want to. All I wanted was to spend time getting to know my dragon mate. Was that too much to ask?