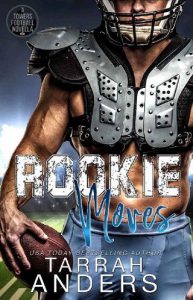 Rookies are supposed to be nobody’s. They aren’t supposed to play much. They aren’t supposed to attract attention. They definitely aren’t supposed to be getting in trouble. But when Grant Toolson joins the famed Seattle Towers football team, he’s already made a name for himself, on the field and off.
When the team decides he needs to clean up his more than a little rough-around-the-edges image, in steps Emily Masterson, the prim and proper daughter of Seattle’s Mayor with a planned meeting.
Only, she’s not as prim and proper as everyone thinks. Not with Grant and not when it comes to what she wants.
Is his image cleaned up and does the relationship work out after hearing hushed conversations?
Well, that remains to be seen…