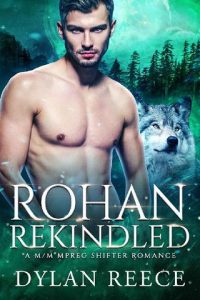 A superstar omega athlete needs one thing for his comeback—the claiming bite from the older doctor who was forced to break his heart in college.

After their college student/teacher relationship was exposed, human Mars McCauley—the golden omega of basketball—never thought he’d get a second shot with his enigmatic wolf shifter professor, Dr. Rohan Holt… let alone bond with the alpha for life. But when a hiking injury threatens to ruin the pro’s career, Mars limps into Darlington… the small town where Dr. Holt retreated after abandoning his fated mate five years earlier.
Rohan, haunted with regret and grief, will do anything to save Mars’s career—even giving the enticing omega the claiming bite to fix his injury. The bonding ignites past passions and deep wounds that the honest doctor can’t heal without deceiving his pack.
With his new wolf shifter powers and a determination to dodge more heartache, Mars vows to forget Rohan and keep his eye on the prize. He has team to rally and a championship to win. Too bad the adoration of his fans suddenly leaves him empty and yearning for the older alpha… who is destined to disappear when Mars needs him most.